Yesterday I farewelled Master and Miss BG. They were heading down to Geelong to spend a week with their Nana and Papa. Initially, it was going to be just a couple of days, so I would be able to go to work, but mum insisted on having them for a week.

They were incredibly excited as they’re under the impression my mum will spoil them. They are heading off to Torquay today for a picnic, with several outings also planned that involve bookstores and ice cream. I’m very lucky that my parents are still hale and hearty enough to take the kids on, live an hour’s drive away, and are spoiling them in the way they never spoiled me (no, not bitter 🙂 *eye twitch*)

Meanwhile I have been doing jobs around around the house like

Last night I picked up Mr BG from work and we went out for a DRINK! It was strange, as if the last eight years hadn’t happened. Then we got some Thai takeaway, something the kids wouldn’t really care for, then ate IN FRONT OF THE TELEVISION, watching Season 6 of 30 Rock. It was bliss.

Other exciting things are planned for the rest of the week, so stay tuned!

Today I played my harry potter game, and I showed mum i like the flowers on youTUBE.

We got babysitted on Thursday by Rory and Morgan. Mum and Dad went out for dinner. Morgan read me two transport books when I was in bed. Rory read a book to Emily.

I went  to Geelong on Tuesday and saw nanna and papa. I got an icy pole and rode my scooter and got a Kinder Surprise. 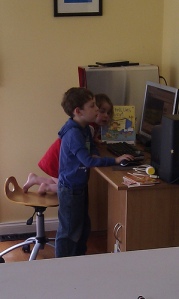 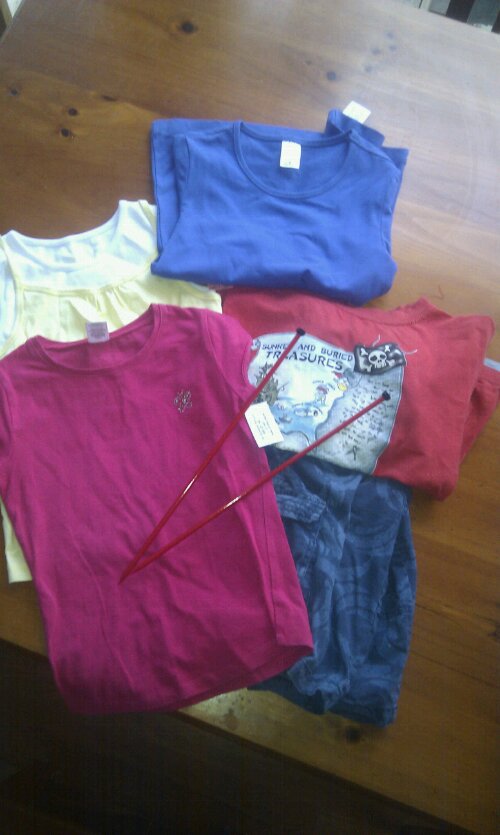 The local shopping strip near my parents’ house boasts two opshops, a Uniting Church shop and a Vinnies, which is huge, and where my mum works as a volunteer. Mum and I popped in, originally to score some knitting needles, and came away with a stash of clothes for the little BGs.
Master BG scored a pirate t-shirt and shorts for the princely sum of $3, while Miss BG is now the proud owner of 3 tops for $4.50. The knitting needles were thrown in for free :).

Moorabool St Geelong, a photo by bookgrrl99 on Flickr.

I went on a road trip today for work, visiting some remote users of my library who are based in Geelong. It’s a good way to get to know users personally and ask them about their information needs.

It was a change of routine, which is almost as good as a holiday. I had a mini-holiday on the weekend, more of that tomorrow 🙂

It was a treat to see Geelong my old hometown and Moorabool Street has benefited from a beautification program of palm trees (which hides the discount stores and empty shops from view). With most of the retail activity having moved to Westfield and Market Square, this end of town can be a bit sad.

It’s probably due to Master BG starting school, but I have been reflecting on days past on my own childhood.

A recent article in The Age on Sunday took a nostalgic trip to the 80s, which looked at how the decade is being rediscovered for its music, fashion and culture.

Making money from nostalgia is nothing new-I just think it’s a hoot that people actually look at the 80s like it’s history or something- wait a minute, it is :).

One thing that struck me was that the author herself was born in 1980, so essentially she missed some of the best bits of the 1980s. Her memories of Bon Jovi, Poison and Europe were simply not mine.

So this week, I’ll be bringing you a taste of my life in the 80’s- my favourite books, music, and memories of my time there. Seeing the 80’s straddled my primary and secondary school years and the beginning of my uni days, it was an interesting decade for me. Braces, and big hair and British boy bands, glasses and moving to Geelong, and my first (forgettable) kiss.

Today is my favourite movie moments of the 80s.

It was when Tom Cruise was a hot guy in Top Gun, Robert Downey Jr was fresh faced and Demi Moore was engaged to Emilio Estevez. The Brat Pack were super hot and Kim Cattrall played a young ingenue in Police Academy and Mannequin.

A lot of what I saw was on that new-fangled device called a video recorder. We lucked out and got a VHS and looked pityingly upon those who had chosen a Beta, mainly because there was little for them to watch at the video store. One of the first videos we saw was from 1980 but is still one of my favourites- Flying High

I watched The Breakfast Club and The Lost Boys on video and taped Ferris Bueller’s Day Off from the TV and watched it so many times I could quote large tracts of it from memory (I still can!).

I was a huge Harrison Ford fan and my all-time favourite movies featuring him were Bladerunner and Raiders of the Lost Ark. Both were seen on video, butthe power of seeing the Director’s cut at the Valhalla a few years later has never left me.

That’s not to say I didn’t go to the movies we went to the Astor in Ararat to see The Man from Snowy River and ET. The Pix in Geelong West (now a church) was where the arthouse movies played and where I saw my first French language movies during my VCE year. My VCE year (1988) was when I saw Monty Python’s Meaning of Life for the first time on telly. At school the next morning, our English teacher overheard us talking about it and launched into singing “Every Sperm is Sacred” – he was an interesting teacher!

The Village Twin (as it was then known) in Geelong was where we would go, usually with my sister and brother being dropped into town by dad. We would head to coles to get cheap lollies and soft drinks before going in! It was we saw Ghostbusters, Gremlins, The Goonies and Back to the Future. My sister was a very big Michael J.Fox fan, and her side of the room was plastered with posters of him as well as Michael Jackson.

The 80s were the decade in which I discovered James Bond, largely through this song

Then I realised the better Bond movies were those of Sean Connery, and Goldfinger the best Bond theme song of all.

I remember cutting history class at uni to watch Dead Poets Society, though now I really can’t see what the fuss is about. St Elmo’s Fire and Dirty Dancing were okay, but not great movies.

The little BGs are back from a sleepover weekend with their Nana and Papa in Geelong. They get to have their breakfast in the lounge room (a huge no no in our house), play with my brothers’ old toys (Transformers and He-Man), and poke around in a different shed. I get to go out to dinner with Mr BG to Eclectic Tastes on a Saturday night, have a fossick around Daylesford on Sunday, and read the paper uninterrupted. It’s a win-win situation.

The house was quieter and considerably emptier. There was no squabbling, no patter of little feet, slamming of doors, huge thumps then giggling- just silence. Getting up in the middle of the night and passing their bedrooms en route to the bathroom, I was struck by the stillness. No quiet breathing, or little coughs or snores. I must admit I tossed and turned in the early hours of this morning, when I’m usually rudely awakened by a cry and the words “Mummy!”

Yes, I missed them, and told them so several times. I got a few extra cuddles from Master BG, which was nice. I think he and I are both coming to the realisation that next year he’ll be a big school boy and we are running out of time together, so we have to make our time count.

So there I am, back in my old bedroom and I wake up from a weird dream involving Matt Smith as Doctor Who, and whom I’m REALLY happy to see. Which was really weird, because I had been watching ‘Silence with the Library’ which is a David Tennant…and I’m going off tangent…

It was 5:45am and I couldn’t sleep, so I started rummaging through the wardrobe, and dug up an old box of photos. They’re vaguely arranged by chronological order, depending on where we used to live. With Dad being a teacher in the Education Department, we would move every time Dad got a promotion.

I saw photos from milestones such as weddings, baptisms, first holy communions and confirmations. New school photos (and there were a few new schools for me!), old friends and old boyfriends, Christmases past, 21st parties, all of us looking younger, fuller faced and with less or more hair. I’ve grabbed a few to get them scanned and will post them up soon.

Trips down memory lane will often put you into a reflective mood and in tribute to the many who have gone before me, here are 30 things I did apart from #blogeverydayofjune