Master BG is growing up. He’s off to school next year, his passion for Ben10 is slowly being supplanted by Harry Potter (thankfully!) and his playing has taken on an independent and imaginative turn.

He came down to the dining room and announced he was going to play library. He had an armful of Harry Potter books, with his little sister carrying some books on animals, robots, dinosaurs. It was going to be a Harry Potter and information library. The next day he was checking in books, and pretending to laminate them.

At his age, I was playing school, and trying to teach my toys and my sister their letters and numbers. Just like my dad.

Then there’s the physical resemblance- the slight build, his fast metabolism and his ability to sleep with few bedclothes and few pyjamas. Master BG even unconsciously mimics his dad’s stance.

He looks like a such a little man with his hands in his pockets!

If you were to ask my kids where I worked, they would say “The gym”, as they see me walk in the door as they’re getting up. Miss BG has said when she grows up she’ll go to the gym with Mummy. Considering the way she loves her dollies/babies, she’s definitely practicing to be a mum as well.

As for Miss BG- well her body shape is solid like mine, and she has a weakness for sugar and spice and all things nice. She also loves to stay warm at night with very warm pyjamas and bedsocks occasionally.

At a recent Christmas breakup for creche, she was given a present of a book from Santa, after waiting patiently at his feet for what must have seemed like hours. Amidst the hubbub of children tearing around, she unwrapped the book, opened it and proceeded to be enthralled by the Fairies and counting from 1 to 10. 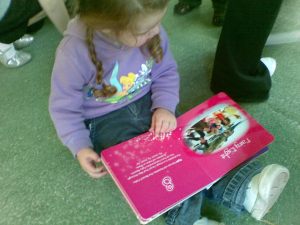 That is SO me.

Apart from a stint in retail when I was at uni, I have never worked for big business. My job, as a librarian in the public sector,  is stable and safe. I also enjoy benefits such as the ability to take paid maternity leave (when I had my children, it was 13 weeks), unpaid leave, and the ability to return to work in a part-time capacity until my children were at school.

The concept of 6 months paid parental leave by Tony Abbott was interesting and has provoked a huge debate. My local paper ran an article with comments from a mother of a 3 month old baby.

The comments to the article however were quite a depressing read.

In answer to a couple of the more choice comments

It gets tiring reading such selfish,  misogynistic diatribes from ignoramuses who can’t spell. It’s almost enough to drive a girl to drink, or at least hit the chocolate.

KT is finally having a baby. After trying for an umpteen number of years, with a variety of fertility treatments here and interstate, she and her lovely husband are going to be parents. She is the type of person whom you know would be a fantastic mum- kind, nurturing and a gorgeous smile. She is a devoted auntie to the myriad of nieces and nephews. I remember the heartfelt congratulations I received when we told her of our pregnancies. It felt like such a cruel injustice that she was unable to do what she what most wanted in the world.

When others would have given up, she kept on hoping, looking for alternative treatments and options.   Thanks to her sister-in-law, KT will be a mum. Her sister-in-law will be the surrogate and underwent IVF treatment with KT’s embryo in New South Wales. She is currently 20 weeks pregnant and all is well with the bump, which will be a boy. A great excuse to go baby present shopping!

RG is a librarian who lives in Darebin. He rides a bicycle practically everywhere. He shares a car with another couple, but doesn’t use it that often. He makes his own honey, which is delicious, has chooks and has converted his suburban backyard into this garden of Eden. This is watered by two huge water tanks he has installed. He doesn’t own a television, but is a passionate movie-goer.  A good bloke, apart from the fact he is a Collingwood supporter that is :).

AV works for the United Nations and has recently completed his Masters in IT through Charles Sturt University, which is where I met him through a shared class and group assignment. His job has taken him to New York, Geneva (where he is currently based with his wife and two young children), and he is currently in Haiti as part of the On-Site Operations Coordination Centre and the Office for the Coordination of Humanitarian Affairs. His tweets tell of working from tents, eating interesting rations and aftershocks which are still occurring.

Three very different people, all of whom are inspiring and doing their bit to make the world a better place.

Master BG has started singing the alternate version of Jingle Bells, Miss BG just wants to rip the wrapping off the presents, and I’m STILL looking for the perfect prestn for my mum. It must be Christmas…

Santa’s emailing now!– if you send Santa using this form, he will send back a response :).

Watch virtual Santa– much in the same way as a virtual librarian, Santa will answer the tough questions like “Will you be able to fit down the chimney?”

Gifts for the librarian in your life– from the Librarian in Black and can be purchased from Etsy. (BTW, this librarian is fine for Etsy stuff)

And if you’re interested in getting Bookgrrl a present… 🙂

A voucher for Smitten Kitten

An excerpt from Connie Lanter’s Tumblr reminded me of the time I had to take Mr Bookgrrl to the doctor after he was attacked by “Fluffy”, a neighbour’s ginger tom. Monty had run inside the house as Mr Bookgrrl arrived home and attacked while he was being shooed outside. I arrived home to find the victim bravely washing his bloodied, scratched and bitten hands saying “’tis but a scratch” “I’ll kill that f***ing animal- I’ll be ok” all the while going whiter by the minute.

The nurse and doctor at the local clinic who disinfected, bandaged and sutured his hands saw the funny side. So did I until I saw them putting stitches into his right hand- I got a bit light-headed and had to leave the room. With his hands looking like a mummy’s, I had to take the day off from work to look after him. I can still hear the howls of laughter from my workmates when I explained that my husband, the cat lover, was attacked by “Fluffy”.

So, the gist of that story is- I’m not overly fond of cats. My husband still is, but then again he is a librarian 🙂

I am not a library nerd in the classic book sense. I do not fall in a heap when a new version of Dewey is released, for example. I do however enjoy organizing things, particularly online. That is probably the reason why I am studying Information Architecture.

When I first started studying librarianship, I was about three weeks into the course when it clicked in my brain and it felt “right”. I was never the ‘ever since I was three I wanted to be a librarian’ type. I had played school with my toys and a recalcitrant younger sister who never did what she was told.  Yet when it came time to do further study after my undergraduate degree, my friends who were recent teaching graduates were largely unemployed, and librarianship offered a marginally better employment rate than publishing…

So I had the same click in my brain when I first started studying Information Architecture. It has followed on from my dabbling in web design, writing web content, usability testing, and website/intranet upgrades.

I like to think my experience as a librarian in a public library has made me appreciate the need to structure online information so anyone can access it easily and intuitively- is that nerdy enough for you?

A day at work, and half of it spent at the reference desk. There was the odd flurry of requests for information, then a lot of time where I was able to work on my other work, namely developing a wiki for staff professional development, drafting editorial guidelines for staff in my organisation who are responsible for web content and all the other things a librarian is called upon to do- the printer not working? You need to photocopy on both sides?

It can get frustrating sometimes after having done an undergraduate degree, followed by a graduate qualification to be actually called a librarian, that your professional life becomes enmeshed in recalcitrant photocopiers and printers, as well as the irate users of said machines. I learned quite quickly that the theory of being a librarian did not quite mesh with the reality :P.

Admittedly though, the theory and practice is coming together slowly in my current job. Returning to study has also opened my eyes to new roles that information professionals could adopt, particularly those in a corporate environment. I have just got to convince our users that we can do more than photocopy articles and fix photocopier jams…

Also vale McGills, a Melbourne institution- a victim of information moving into the online environment and competition from bookstore chains.

An early post to make up for no post yesterday- it had been a long day and bed was more inviting than blogging.

An early birthday present arrived for Mr. Bookgrrl. I also felt compelled to get one for myself in case the other one got lonely because I simply had to have one! They are available online at Until. 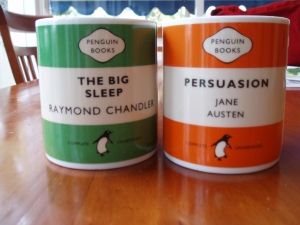 Mr. Bookgrrl was particularly rapt when presented with the mug, as he has a matching t-shirt which was purchased in Cambridge 10 years ago. The same trip also saw us visit Bath, a city which features prominently in Persuasion (a lovely symmetry, no?).

My first post was something I had to get off my (ample) chest. The gauntlet was thrown down for me to speak up and so I did. So I will backtrack a bit and say hello.

I’m 38, a lady (more on THAT later), a librarian in a special library in Melbourne, whose interests include Usability, Information Architecture, Politics, Music, Art, and Books (well I felt somewhat compelled to say that).

I’m also a student, news junkie, and recovering chocoholic (I have a Haigh’s and Koko Black within a five minute walk of work).

More will be revealed in further posts to come.