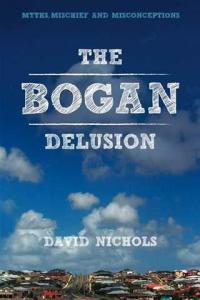 A couple of years ago, David Nichols and his wife, artist Mia Schoen, bought a house in Jacana, in Broadmeadows and moved out of the inner city. The Bogan Delusion was written during David’s commute from his new home to the University of Melbourne, where he lectures in urban planning- a good use of his time!

In the book, David deconstructs the myth of the bogan and the bogan’s  place in suburbia. He posits the existence of the anti-bogan, an inner-city elite who are scornful of the bogan’s tastes and lifestyle, without ever having actually ventured beyond the pale of the inner city to experience suburban life. The derision  of the anti-bogan’s towards its counterpart is simply another iteration of class snobbery (yes, Virginia, there are social classes in Australia, we just don’t like to talk about it). In many ways it’s another way of labelling undesirables as the ‘other’, a mantle which has been worn by women, and people of various religions and cultures over the centuries.

The book is also an expose of suburbia, and regions in Victoria and New South Wales which are typically associated with bogans, are discussed from a planning and sociological stance.

The book draws from David’s experiences and background as a lecturer in planning at the University of Melbourne, sociological stories and historical analysis. It is also illustrated by his wife Mia, who has focused on depicting suburbia in her art and also played in a band called New Estate. It’s a book which is readable and ultimately thought-provoking.

I’ll be honest with you- I like to wear black, drink coffee gin and red wine (I hope my dentist isn’t reading this). I go to farmer’s markets, prefer vintage over brand-new and am an avid watcher and listener of the ABC. On the basis of this I am an anti-bogan. However, I have never lived in inner city Melbourne, lived and worked in the suburbs (Mr BG worked in Narre Warren, which is Kath and Kim country) and since moving to regional Victoria, have just become the proud owners of a lawnmower.

I also used to read the What Bogans Like blog which David mentions, and which quickly became an excuse for a bunch of inner-city snobs to pour scorn on everything and everyone they didn’t like. The viciousness quickly turned me off their blog

, I would think twice about casually labelling someone with that epithet now.

Caveat: I know David and Mia personally and they are both very nice (and talented people).

Following on from VALA, an unconference or Library Camp was organised at the University of Melbourne. Nearly 200 attendees attended from academic, school, public and special libraries. It was free for delegates, thanks to sponsorship from libraries across Australia.

The day was a chance to extend discussions that had arisen from the previous three days, or to facilitate discussions on whatever took your fancy. The ideas were crowd-sourced and people then voted on the topics they wanted to hear discussed. There was also the opportunity to hear lightning talks of 3 minute presentations from delegates.

These were the sessions which had the greatest imapct for me:

Professional Reading in the National Year of Reading.

While the National Year of Reading is strongly focused on the recreational reading habits of Australians and to promote literacy, it was believed that this was a chance to promote reading of professional literature amongst library staff.In the midst of working and serving and reacting to our user’s needs, our own needs to continue learning about our own professional environment are often pushed aside. One delegate said she had to give herself permission to read for 10 minutes at the end of the day.

An online journal club was mooted, which sounds promising. It’s an idea which could be taken back to our places of work to get other staff reading more professional material- and not just the latest copy of incite. With aspects of librarianship becoming increasingly specialised, professional reading can often mean reading something which doesn’t appear in a library journal/website. If professional reading was tailored to a person’s specific interest and incorporated into their work day, perhaps more reading would get done?

Jason Griffey presented footage and discussed his time at the Consumer Electronics Expo in Las Vegas, which had 165,000 attendees. He was one of 6 librarians who attended (there really needs to be a greater acceptance of librarians attending non-library related activities to think outside the circle). He saw a tablet which could be powered by a handcrank, aimed at users in very romote places, and a Lytro camera which would never give you an out of focus shot again, through its plenoptic lens.

Librarians as researchers, or basically the need for librarians to undertake research as a means of getting published and achieving recognition as academics. While this has an academic library perspective, more librarians need to contribute to the profession by writing of their own expertise and applying research methods that they themselves try to instil in students. It often comes down to finding the time (this post was written over ten days in spits and spurts on the train and at home) and having the support of your parent organisation.

Amy from Melbourne City Libraries spoke of the experience of Neil Gaiman and Amanda Palmer attending a library event, simply on the basis that they were asked. Lesson learned : Nothing ventured, nothing gained!

Carolyn McDonald spoke of innovation and how people strive to be innovative, when in fact you should be thinking about the goals you wish to achieve. Innovation shouldn’t be your goal. Lesson learned: don’t do something just because it’s cool, but because it has a purpose and use.

At the end of the day the question was asked- What will you take away from this day? For me it was faces of people whom I had gotten to know very well on Twitter- this was another reason why I enjoyed my day at VALA. I ended up using the law of two feet and having a coffee and chat with Kate before heading to the Melbourne Uni Bookshop for a browse before appearing at afternoon tea.

Another thing  I took from that day was the pleasure of heading back to my old uni, at which I had the best time 20 years ago. I retraced my steps past Wilson Hall, through the Old Law quadrangle (I’m so old I remember when the law school was actually there!), through the Old Arts building, said a brief hello to Babel, the language building, then down the slope to the Baillieu Library.

I mentioned in my last post about enjoying visiting other libraries. One of the reasons is collections, the quirkier the better!

Libraries are often know for their collection specialities. Mental Floss has put together a list of universities libraries whose collections are a bit way out– showgirl memorabilia and Dean Martin are housed at the University of Nevada for example. Yet another reason to visit a library!

The last time I was in Belfast visiting my extended family, I happened upon the Linen Hall Library in the Belfast CBD. It was founded in 1788 and is Ireland’s last surviving subscription library- similar to the Mechanics’ Institutes in Australia. They had an exhibition of theirNorthern Ireland Political Collection, which comprised of 14,000 images, pamphlets, posters, books and audio-visual items. It was fantastic and showed all sides of the conflict.

I have yet to get to Italy, but it will be a little bit closer thanks to Google, who have signed an agreement with the Italian government to digitise over a million antiquarian books from national libraries in Florence and Rome. The works of Dante and Machiavelli and Galileo will be available for free.

Closer to home the State Library of Victoria has a myriad of eclectic collections, including art, treasures, and my favourite, the W. G. Alma Conjuring Collection. I mean, what’s not to like about a collection of magic?

When I was completing my librarianship qualifications, I did a placement at the University of Melbourne, which housed memorabilia from the composer Percy Grainger. Apart from some very unique instruments which he developed, there are some personal artefacts which are quite interesting… The library also houses a romance fiction collection. Sadly my dream of working at the University of Melbourne has never been realised :).