This is my front door, a white door with lead lighting in the window.

It means I am home, after a long day at work, or from travelling for work.

Sometimes I have Mooch waiting to be let in at the front door, especially if she has heard the car pull up. If I am lucky, there is a parcel at the door.

Inside it is warm, with a lovely hum from the presence of my family or the central heating.

I have been away from the family for work a bit the last few weeks, and it’s not easy. I am thankful that MrBG is there to keep things ticking along, and I know the kids are in safe hands, even though there seems to be a suspicious amount of white bread and chocolate mousse (in the form of a ‘dairy dessert’) being consumed in my absence.

After the craziness of the last few weeks at work I am glad for a refuge here.

The Internet woes continued, and it is only now that I have the time and the bandwidth to post! The data usage on my phone has been quite considerable as a result:).

Master BG’s birthday party was on Saturday (day 29), which involved laser tag, his mates from school, his sister and pizza. His accumulated birthday money is likely to be invested in Lego, though he has also expressed an interest in wanting to play a keyboard. A dilemma ensues- do I want my ears assailed, or my feet with the torture instruments known as stray Lego pieces?

Day 30 saw Mooch in the guitar case, attempting to sleep. It is always fun to see where she will snooze, as any of the cat beds we have made for her are only slept in for a couple of days. Is it a symptom of her life as a stray? An incredible level of fussiness? Inherent knowledge of her humans that they will be intrigued and feel the need to record any silly antics and blog about them?

The last day of #amonthinthelife takes place at 7am in my street. It’s barely dawn and you can see the church’s bell tower framed against the morning sky. Daylight savings ends soon as the days get shorter. I am looking forward to that extra hour in bed.

My month in a life was an interesting exercise, and definitely got me motivated to post more. I realized that it is easier when technology plays nicely and how important it is to have a goal when you write. While my goal was to document with a photo and text a day, it also gave me a chance to reflect upon which aspect of the day I wanted to depict. That reflection upon my day was rewarding in itself. People’s comments both on Instagram and on the blog were also a delight. So thank you to my readers for following my month!

Our front verandah (or as Master BG refers to it, the revandah) has been in dire need of attention since we moved into our yellow house over 4 years ago. The nails pop up, the boards are springy in some places, and a few boards bear evidence of long dead pot plants where dripping water did its thing.

So armed with a name of a builder (referred by a friend, which is THE way to find a good tradie in Ballarat), and a tax refund, we  are getting it rebuilt. It’s been repaired a couple of times over the 100 years the house has stood- we have counted 3 types of timber, all of varying widths and quality. The builder, Scott, believes the repairs may have been done in the 1950s first, then another lot done around 20 years ago, when extensive renovations were done to the house and to the backyard.

Scott and his friend Jay arrived Monday at a very civilized hour of 8.45am. At least it gave us plenty of time to look presentable before they arrive.

On Monday they ripped up the old boards, propped up the verandah with supports and dug holes for extra stumps to support the joists- in 38 degree heat. Those boys were amazing. 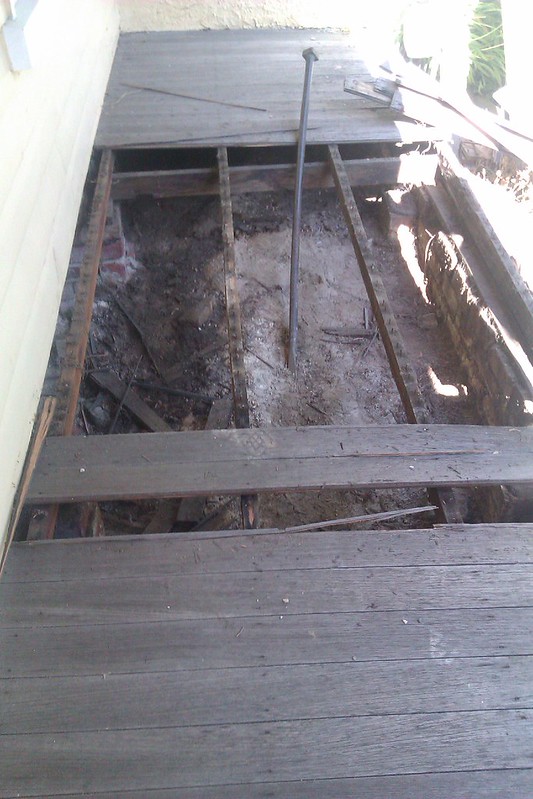 The kids found ‘treasure’ in the form of an old coke tin! They also were fascinated by what was underneath their house. 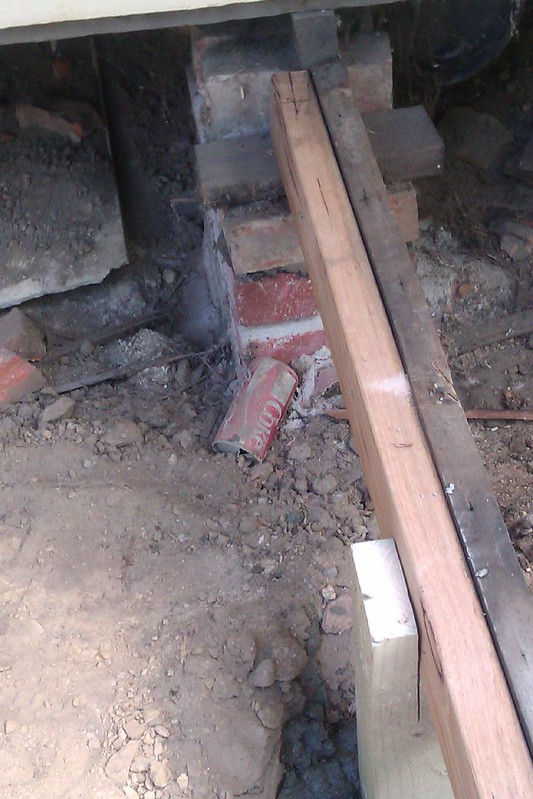 On Tuesday the builders replaced the old joists for new timber and filled the holes with concrete for the new supports. 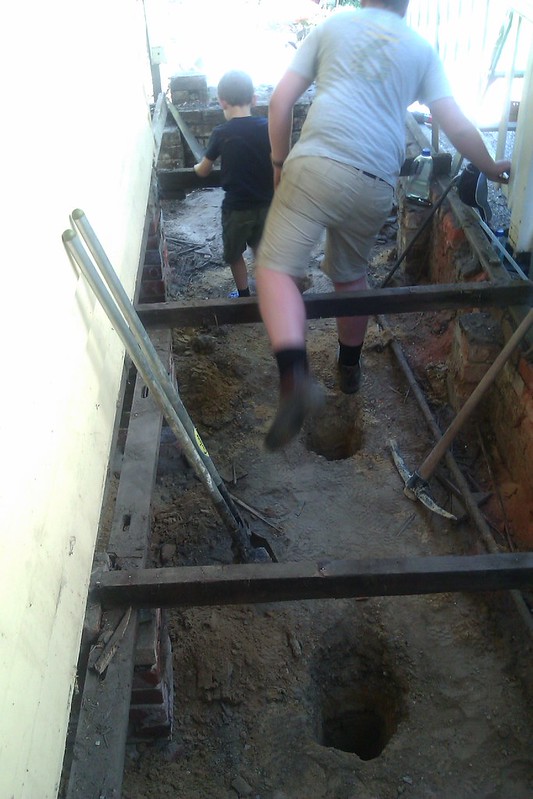 On Wednesday more supports were added, and then the builders took a break…for about six days. It took a phone call for them to turn up, with more boards, lots of nails and a saw. 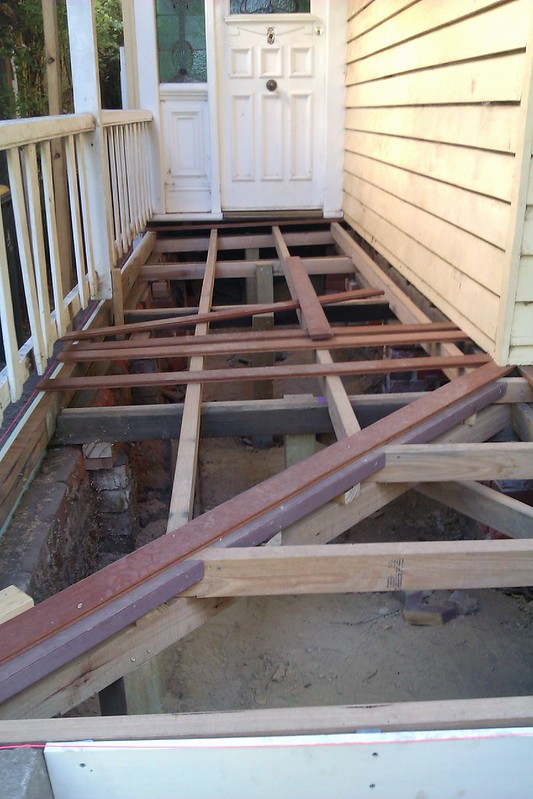 The renovations and seeing under the house has sparked an interest in our house and its former inhabitants. It may involve a trip to the Ballarat PROV Office to track down rates records and other sources to learn more about the house and the street.

And tonight it was finished- ta-da! 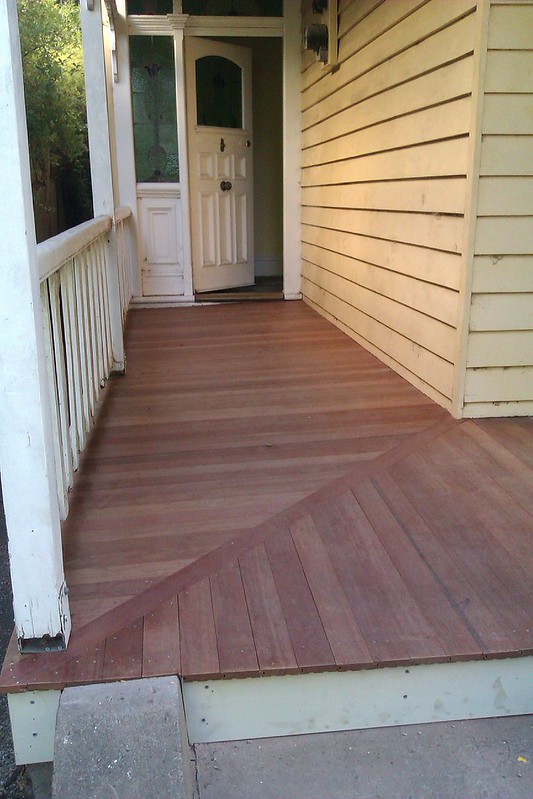 After a 500 kilometre-round trip involving two Christmases, lots of presents and not enough alcohol, I’m home.

Home is full of laundry to be washed hung out and sorted, dishes to be put away and toys to be sorted, but it’s also home to a cat that is glad to see us, and a bed that isn’t too soft or too hot, but just right.

I also received some good news about my beloved phone which had finally been repaired after two weeks, after a bounce test failed.

I have also, thanks to being on the road for the past two days, managed to avoid much of the madness of the post-Christmas sales. After having survived 7 Christmases as a retail chick in Myer, I am immune to the siren call of stocktake sales. Plus, after having to brave shopping on Christmas Eve, the last place I really want to be is back in a shopping centre again. Besides, I’m saving my shopping dollars (or Euros) for other ventures and places :).